Remarks as prepared for delivery

Thank you, Rector Blackman … and to you, graduates—and my soon-to-be fellow alumni—let me join with all who are wishing you congratulations!

I sit through enough of these ceremonies to know that my presence and the words I share will be most appreciated if I keep my remarks brief and relevant.

So I asked myself, what are a few things that I might have wanted someone to say to me when I was sitting where you are now almost 30 years ago?

First of all, I can’t believe that almost 30 years have passed. You will hear over and over that time flies, that time is precious, and still I wish that someone could have reminded me of the fundamental truth that time is a limited resource.

You can’t buy or borrow one second more ... so dare to do the things that scare you … and never miss an opportunity to get to know another’s story.

Time and again in my life, seemingly random conversations have led to life-altering opportunities or memorable achievements … including one such moment when I was walking across campus at Morehouse College and said hello to a woman sitting on a bench. By the time that conversation ended, I had been invited to apply for a job in Washington, D.C., and had moved eight weeks later.

Which leads to my second point … reaching that point in your maturity where you truly see your friends, parents, bosses, and even your heroes as fellow human beings who are also on their own journeys of discovery.

Many of you will struggle to overcome imposter syndrome—that nagging sense or expectation that everyone else has already figured it out … coupled with the fleeting hope that, at some point in the future, you will figure it out and “arrive,” no longer burdened by fear or uncertainty.

The things you see others around you doing—their accomplishments and achievements—may require effort and sacrifice … but they are well within your reach. Don’t wait for your fear or anxieties to go away.

Courage is not the absence of fear; it is the ability to persevere in the presence of fear.

And while it is true that the people around you are no better than you, keep in mind as well that neither are they less than you, though they may well experience the world through different lenses.

One of my heroes is Martin Luther King Jr., whom many of you will associate with his “I Have a Dream” speech … or perhaps the one he gave the night before he was assassinated, titled “I’ve Been to the Mountaintop.”

For me, however, King’s greatest speech is one he gave exactly two months before his death, titled “The Drum Major Instinct.”

In that speech, King explained instinct as our innate desire for recognition, for attention, for distinction ... and notes that, while it is not inherently good or bad, all too often it can drive us to try to lift ourselves up by putting others down.

Education, at its best, does not lead to arrogance but rather to humility, because we learn how little we truly know … and how little we will ever know.

The greatest among us are those who remember always that no matter how learned we become or how deeply experienced we are … we still only see a small piece of the whole … and there is always the chance, indeed the likelihood, that we could be wrong.

To be educated is to recognize how dependent we are on others.

I recently read that, shortly before his death, Steve Jobs wrote a memo to himself in which he noted that he didn’t write the music that inspired him ... didn’t make the medicines that helped treat his illness ... didn’t weave the clothes that he wore … and didn’t grow the food that he ate.

I would add that, for many of these things, he almost certainly didn’t know the creator’s politics, gender or gender identity, sexual orientation, race or any of the other things that so often currently divide us.

To be educated also means valuing diversity of thought … and recognizing how important to human progress are those who are different from ourselves. I often wonder at the irony—and the hypocrisy—underlying the fact that our movies and histories celebrate the ones who are different, who go against the grain, who challenge the status quo … while in reality we do everything in our power to make those around us conform and assimilate.

Today you have honored me with a Doctor of Humane Letters. When I was completing my master’s degree here at George Mason, I was also working at the National Endowment for the Humanities as a Specialist—first in outreach and later in media relations.

From time to time, I am asked about the humanities—what they are and why they are so significant—and how someone with a degree in the humanities ended up building and helping to lead some of the largest universities in the country. At the core, the humanities are about what it means to be human, the artifacts we produce and our relationships to them. Whether looking at ways of thinking ... the creation of narratives … or the evolution of cultures, ultimately the humanities place a mirror in front of us, forcing us to acknowledge both our achievements and our failures.

Shortly after I left George Mason, I took a job as an instructor, and in one of my freshman classes, I used a TIME magazine article about the Russian sailors who ultimately died in the Kursk submarine accident in 2000.

An explosion near the bow disabled and sank the vessel, killing many of the crew and trapping the remainder in compartments near the stern. The article noted that, when salvage crews were finally able to raise the submarine more than a year later, they discovered that the sailors had written goodbye letters, in the dark, while their vessel rested on the ocean floor more than 350 feet below the surface.

They knew, of course, that they were almost certain to die, and they also knew that, given the depths, it was unlikely that their bodies would ever be recovered. Why, the article asked, do we, as humans write even when there is little chance that it will ever be seen?

And the answer is because it is a record that we have been here. That we existed. That we mattered.

And so my final point is this: It is your time. You matter. Make your mark on the world and do all you can to empower others to make their mark as well.

I am no fan of placing restrictions on expression or actions as long as we do our best to never hinder someone else’s journey in life even as we carve out our own paths of discovery. Many of my most cherished and important moments sprang from interactions with others whose views and experiences of the world were almost unrecognizably different from my own. I am better for it. You will be too.

You will have critics. Do not let them make you cynical. You will have failures. Learn from them so that tomorrow will be better than today. You will have moments like these—surrounded by those you love and basking in the glow of accomplishment. Let them sustain you as you pave the way for those who come behind you.

We are rooting for you—all of us, especially the two presidents named Greg sitting on this stage today. Thank you again, GMU, for this honor. And congratulations again to you students. Go forth.  Do great things. I bid you Godspeed. 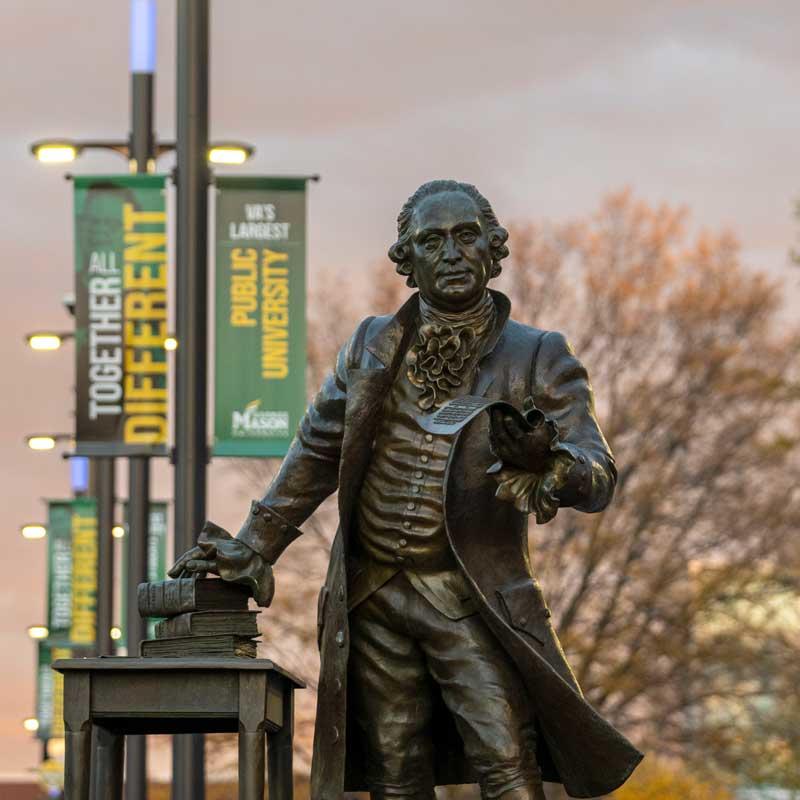 Keep Up with Mason